'Russian strategic bombers, Tu-160s, have landed in Venezuela. Yes, yes. So that way it hurts Yankees,' according to President Hugo Chavez. An outspoken critic of the United States, this is how Chavez sees Venezuela's latest cooperation with Russia. President of Venezuela Chavez himself came to the Libertador Air Base to greet Russian crews. The exercises, the first major maneuvers in the U.S. front yard since the Cold War, are a show of strength by Russia. The planes arrived on September 10 days after Russia and Venezuela announced they would conduct joint naval exercises in the Caribbean later this year.

The decision on the flight was made by Russian President Dmitry Medvedev in response to an invitation from the Venezuelan government. The bombers will carry out patrols over neutral waters in the Pacific and the Caribbean. Russia says Venezuelan President Hugo Chavez might travel on one of the planes under certain conditions. According to Chavez, the arrival of the planes is not related to recent events in South Ossetia in any way. On August 7, 2007 Russia resumed strategic aviation flights, and some regard this as a return to the 'Soviet empire', but the world simply becomes multi-polar, Chavez said. The Tu-160 strategic bombers landed at Venezuela's Libertador airfield on September 10. Their return was scheduled for September 15. Maj.-Gen. Pavel Androsov, commander of the Air Force's strategic aviation, said the planes' return 'could take place later than September 15. It all depends on Venezuela's hospitality.'

Cuba has sufficient infrastructure to accommodate strategic bombers, Commander of the Long-Range Aviation of Russia's Air Forces Major General Pavel Androsov told a news conference 11 September 2008. He noted that Russian air forces were not yet planning to land on Cuba, although they had studied its capacity. When asked whether they were going to fly to other countries except Venezuela, Androsov retorted that he could see no reasons why they should not. 'The US air forces have already visited a lot of countries. We are not looking for enemies, rather, we are looking for friends, and friendship should be active,' he stated.

First flown in 1982, the Tupolev Tu-160 'Blackjack' is a counterpart to the American B-1B. Both share a similar configuration, but the Soviet designed bomber is about 30 percent larger and considerably faster. Its initial combat radius of 7300 km is estimated on a mission profile of subsonic high altitude cruise, transonic penetration at low altitude. The Blackjack has a conventional or nuclear free-fall bombing capability, but it has more often been associated with the AS-15 'Kent' cruise missile. The Blackjack is an extremely expensive aircraft, so with the current economic crisis affecting the former Soviet Union, together with the relaxation in international tension, it is unlikely that more than the 25 bombers currently in service will be completed. 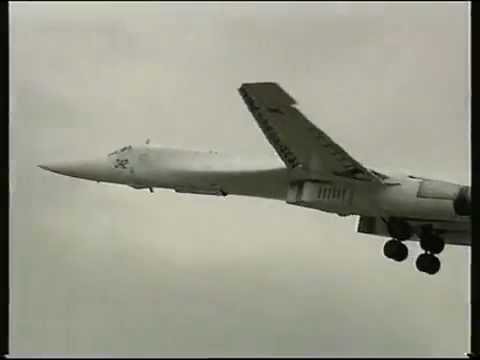 A re-arming plan for the Tu-160 under which the modernised Tu-160 was to carry 12 Kh-101s or Kh-SDs was halted in 1998. At that time the Russian Air Force had only six bombers of this type and talks on buying a further 19 from Ukraine fell through. In April 1998 it was decided that Ukraine's Tu-160s would be scrapped. There was therefore no sense in launching an upgrade programme and the complete withdrawal of the Tu-160 from service was being considered.

It was reported on 02 July 1999 that the Gorbunov Kazan Air Industrial Association received an order from the Ministry of Defense of Russia to complete the production of one Tu-160 strategic bomber. According to the Association's general director Nail Hairullin the contract for the aircraft production was worth 45 million rubles.

In July 1999 the Minister of Defense of Ukraine Alexander Kuzmuk confirmed that Kiev officially proposed that Moscow accept as payment for the gas debts 'about 10 strategic bombers Tu-160 and Tu-95'. He refused to tell the exact cost of missile carriers, however, in his judgment, it would be 'considerably more' than 25 million dollars for each machine. On 12 October 1999 the Russian air force announced an agreement that would allow Ukraine to pay some of its multimillion-dollar energy debts by handing over 11 strategic bombers. Ukraine had tried to unload the bombers since the Soviet Union collapsed in 1991, but talks had foundered because of differences over the price tag and other conditions. The deal includes eight Tupolev 160 Blackjack bombers and three Tupolev 95 Bears.

The 11 strategic bombers and 600 air-launched missiles exchanged by Ukraine to Russia in payment for the gas debt were transferred in mid-February 2000. Two Tu-160 bombers flew from Priluki in the Ukrainian Chernigov region for the Russian air base in Engels. The missiles were sent to Russia by railroad. Three Tu-95MS bombers and six Tu-160 airplanes had already arrived at Engels since October 1999 in fulfillment of the intergovernmental agreements. Before being moved to Russia, 19 Tu-160 airplanes were stationed at the Priluki airfield and 21 Tu-95MS were located in Uzin.

A TU-160 strategic bomber crashed on 18 September 2003 in Engels. The crash occurred near Sovetskoye, Saratov oblast. All four crew members were killed in the accident. Preliminary data indicate that the cause of the crash was a fire in one of the engines, which started when the plane was at the altitude of about 2 km. The bomber was not carrying any weapons. The crashed aircraft was built at the Kazan Aviation Production Association in 1992. It was deployed with the 121st regiment of the 22 heavy bombers division, based in Engels. 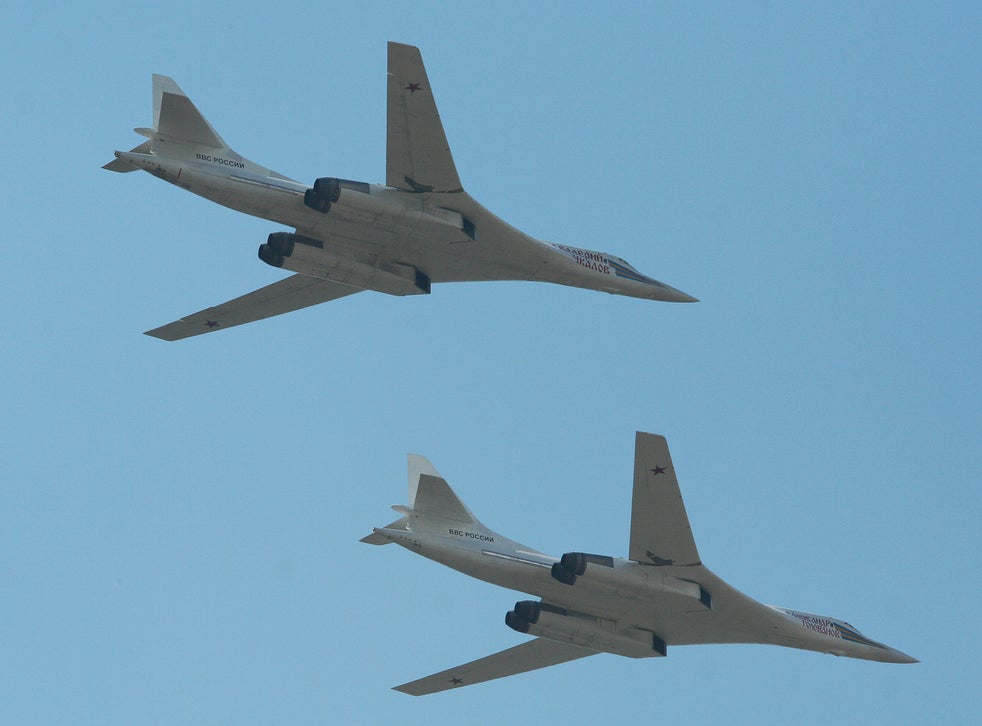 After the loss of the aircraft, there were 14 strategic bombers of the Tu-160 type left in the Russian strategic aviation. According to reports, on 03 November 2019, two US fifth-generation F-35 Lightning II fighter jets attempted to intercept a Russian Tu-160 strategic bomber during a scheduled flight in the neutral skies over the Sea of Japan. The Russian pilot masterfully put his machine into afterburner mode and escaped its pursuers, leaving just a glimpse of the giant bomber on the Americans’ flight radars. The Russian media reports also described the Tu-160 as an 'outdated' veteran of the Soviet air force, while the fifth generation F-35 Lightening II is the most modern and highly praised U.S. fighter aircraft. The Tu-160 has a maximum speed of 1,379 miles per hour (the F-35’s top speed is around 1,200 miles per hour).

Whatever its origins, the story seems to be fake. There was no record of any such incident over the Sea of Japan on Nov. 3 in several aviation incident tracking databases. The Russian media reports used strikingly similar language and appeared to be copy-pasted from a single source -- the Chinese news agency Sina. Yet, the Sina report cited Russia’s Sputnik state-owned media outlet, which in turn cited Sina as its source. Thus, it is impossible to determine the precise origins of the story. The defense committee of the State Duma (the lower house of Russia’s parliament) told the weekly newspaper Voenno-Promyshlenny Kurier (Military-Industrial Courier) that there were no Tu-160 flights over the Sea of Japan in November or any other time during 2019.

The first Tupolev Tu-160M, M as modernized, flew on February 2, 2020. The four-jet engine took off from the Kazan aeronautical plant airport for a flight lasting 34 minutes.

The first modernized Tu-160 'Blackjack' took off for the first time on February 2 from Kazan Aeronautical Plant Airport for a 34-minute flight with the landing gear out. The crew of Tupolev's flight test base at Zhukovsky reported that the aircraft reached a maximum altitude of 1,500 meters (4,920 feet) and performed well. The Tu-160M ​​bomber that carried out this first flight is in fact the former Tu-160 bomber 'Igor Sikorsky' (n°14, red color), named after a famous Russian like all the rest of the fleet of Tu-160 in service.

The newly manufactured Tu-160 and the improved versions will not be different from each other, but they have received different names from the Ministry of Defense: Tu-160M ​​for the enhanced aircraft and Tu-160M2 for the new bombers that are not rebuilt from aircraft and/or cells dating from the Soviet era.

The Tu-160M ​​features, among other things, the latest electronic warfare suite, an advanced communications system with enhanced jamming resistance, and weapons that will increase its abilities.